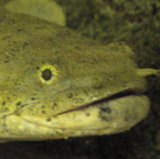 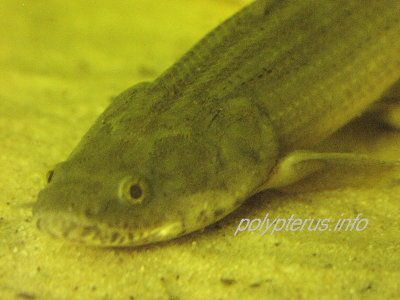 Origin: Most of West Africa

Description: Grey to greenish-grey colouration, with a paler ventral surface. Horizontal bands evident on the upper surface from the head to the dorsal finlets, and extending about halfway along the side of the body from behind the gills. The flanks have irregular vertical bands. Prominent lower jaw longer than upper jaw. 13-17 dorsal spines.

Comments: This bichir is now a fairly common import, and captive-bred fish are also available in the trade.

P. "lapradei" is very difficult to distinguish from P. bichir, particularly when markings are faded, as in stressed or newly imported fish, and is no longer considered a separate subspecies.